From the archive returns with a photograph taken during the British Rally Championships in the late 1990s. The image has always been a favourite of mine but my relationship with it has always been a little complicated. It was from a project that was challenging, often wet and very muddy at times, and a good series of images of the rally scene during the late 1990s. Having said that, it was removed from the portfolio section ten years ago. Why?

This months photograph was shot in during the rally of Cumbria on a rainy and muddy stage during the 1998 British Rally Championship. Two teams dominated with Renault and SEAT fighting for the drivers and manufacturers championships. In the end, Renault won the drivers and SEAT took home the manufacturers later that year. No one really came close to both of those teams during the stages (apart from VW with two cars but they suffered from reliability issues) in regard to team size as well as performance. Early into the project, I had an idea for a photograph using slow shutter speeds combined with flash via slow sync flash. The camera was set to around 1/15th second and the flash froze some of the action. Blur and detail. Movement and energy. The key elements of motorsport, that’s want I wanted to capture in a photograph. With this photograph, I think I got pretty damn close.

The car was close. The photograph was shot with a 28mm lens on a tight corner where the momentum of the car was heading away from me. The flash came from my classic Vivitar 283, an outstanding flashgun which is still going strong. The circumstances were right for flash photography. The light was poor by this time due to the increasingly poor weather conditions. This was the final project I would shoot with Pentax cameras. The cameras, like me at the time, were starting to become a little worn out and on the rally of Cumbria, I began having intermittent frame advance issues with shots overlapping on the film. Just occasionally, but happening enough to realise that a camera was on its way out. Fortunately, I had a backup or two with me.

This archive photograph comes from a photo project shot during two rounds of the 1998 British Rally Championship in Wales and Cumbria. Initially, the idea was to embed with a rally team and photograph the event from their point of view. Getting permission to access a team turned out to be impossible. Numerous phone calls were made but I never got past the secretarial defensive screen or even the chance to talk to a PR officer. Nothing. Totally blocked. I needed to come up with an alternative option. I can see now the reasons for not wanting to give access, after all, I could have been spying for another team, but at the time it felt unfair. It seemed simple at the time but really I went for a very complicated option that required so much work even before the photography started.

Plan B was the only other route. I was to cover the event as part of the media and this was the path I had to go down. There were no other options available. Press accreditation was gained and I was able to get the access to service areas that I needed. There were also other issues to consider. Getting to the rallies would be a logistical juggling act in its own right due to location and the speed at which the rally moved around. The previous motorsport event I’d photographed was speedway – a wonderfully close kind of sport that just requires trackside access. Rallying offers that close proximity to the action too but the geographical issues are huge. Just getting trackside can be difficult as often the locations are remote and spread out over a wide area. Following a rally is not easy! 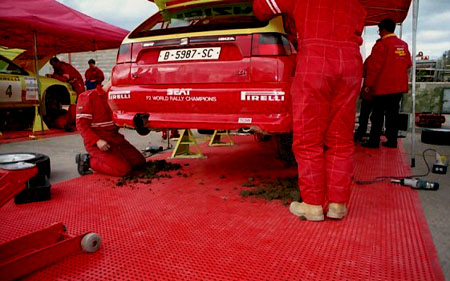 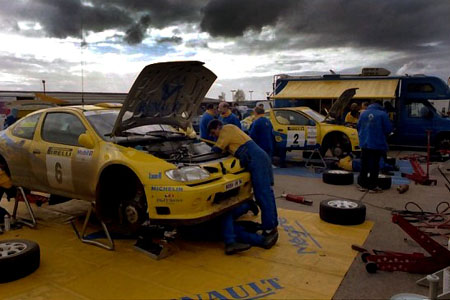 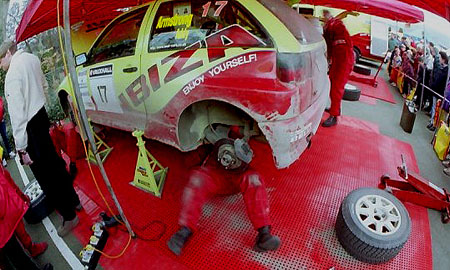 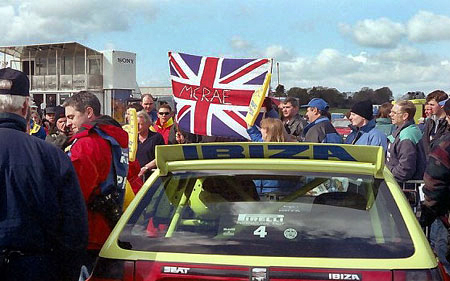 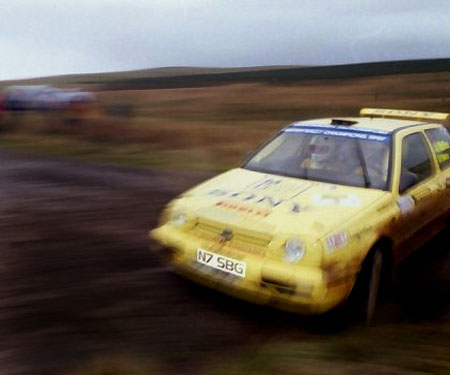 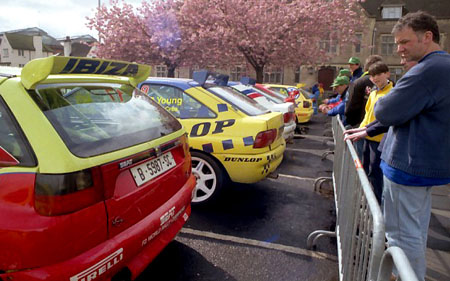 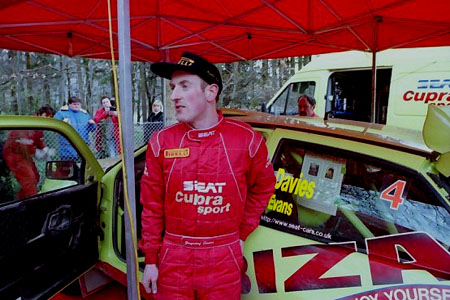 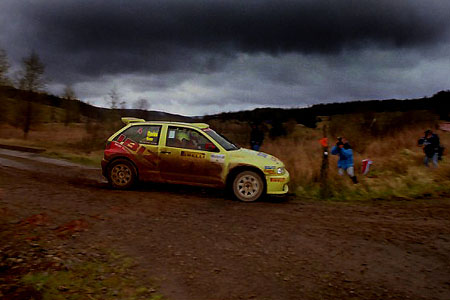 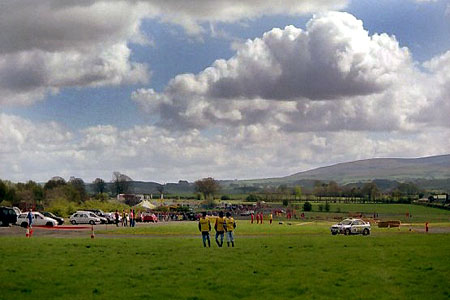 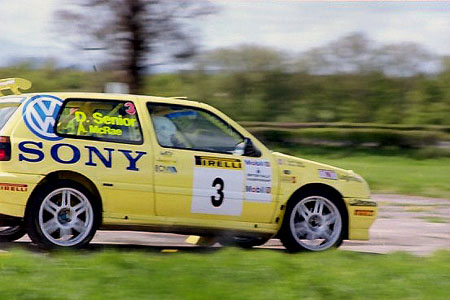 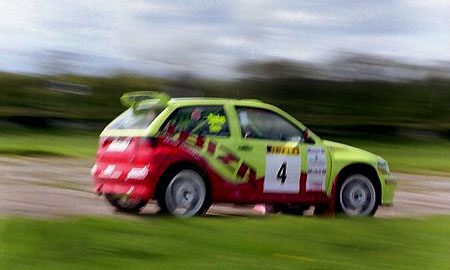 Just reaching a rally location can be an ordeal in itself not to mention the weather. Cumbria delivered classic rallying weather with rain and dark clouds adding to the drama. It was great fun to photograph. Rallying is a colourful and passionately followed sport with fan braving all kinds of hardship just to see the competitors speed through a stage. As a spectator sport, there is probably none better. You just stand next to the track or road they are racing on. No spectator stands or fences in the way. It’s the perfect environment for the photographer wanting to get close to the action. All of the senses can take in the atmosphere too, from the bright colours and energy of the car, the terrific sound of the engines and popping exhausts through to the smell of oil and engine fumes. Petrolhead heaven!

Hindsight is a wonderful thing. Looking back I would have probably concentrated more of the fans than the event. The fans were as colourful and passionate about the sport as football fans are, though without a lot of the tribalism that goes with supporting a football team. Concentrating on the fans would have been far less challenging than trying to cover two rounds of a rally single-handed! I can see it now. Head and shoulder portraits shot on my Bronica medium format camera capturing the diverse and colourful persona of the late 20th-century rally fan. A great idea… shame it’s twenty-two years too late! Another alternative surfaced during the rally. The British Army had a Land Rover rally team that would have been great to document – especially as it was their last year of racing due to budget cuts. Sadly I only found out after talking to some Army lads in the pit area. All too late.

Of all the projects I’ve completed the photography shot during in the British Rally Championship remains the one that still doesn’t quite sit right with me. Oddly I don’t really know why. It could be due to my near burnt-out state of the time. Maybe I just still associate the images with that period in my life. Alternatively, there was something about the project that I felt didn’t quite gel. Right from the start compromises had to be made due to a lack of team access. This changed the focus of the project right from the go. Later the sheer logistics of getting from stage to stage would also play its part. Was the subject matter just too broad that I’d had never been able to document it adequately? Maybe. Narrowing down the photography may have improved things. Who knows?

A full gallery of rally images hasn’t been seen on the website in over ten years and wasn’t even considered for addition to the site when I moved over to a WordPress powered website in 2011. I didn’t want anyone to see the photography. I’ve slowly come around to the photographs again though the project itself still doesn’t sit very well with me. In recent years I’ve had similar issues with other photographs but for very different reasons.

The project that got away? A failure? No, not quite, but it didn’t totally succeed either. Maybe that is the issue. You can’t win them all though. It might actually be worth going through the photo edit process again as I have with previous projects. See if I missed anything. Maybe, just maybe, it’s time to consider adding at least some of the photographs to the portfolio section again. Time to come to terms with the flaws.

Lost in thought on a Norfolk Beach

Back in the Archive There is nothing like a Norfolk beach for clearing your head and finding some peace. Recently I've been diving into my digital archive which was an enjoyable if someti[...] Read More