From the Archive: Beaumaris Couple

From the Archive: Beaumaris Couple 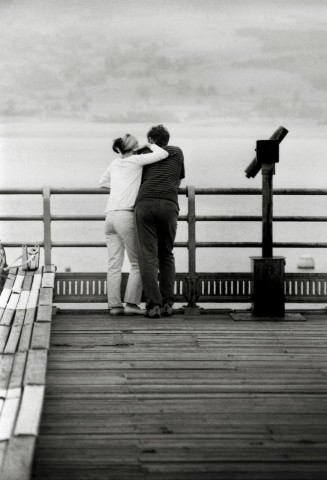 This image of a couple, lost in the moment on Beaumaris Pier, is one of my favourite photographs. It was taken in July 2003 during a visit to the town of Beaumaris, located on Anglesey, North Wales. The town has superb views looking over the Menai Staits towards the mountains of Snowdonia.

In 2003, i’d just started changing camera systems, going from a Pentax over to a Nikon system which limited my lens choices. The camera used was a Nikon F4s with a Tamron 80-210mm zoom set to around 200mm. The Tamron lens were especially useful during the stop-gap transition as the lenses featured the the Adaptall 2 mount system allowing a change of lens mount – just buy the Nikon adaptor to go from a Pentax KA bayonet to the Nikon AI-mount. Very handy and affordable as AI mounts could be found on e-Bay for under £20 each and you could sell the old KA ones!

Film stock was Ilford FP4. At the time i was using a mix of FP4, HP5 and Kodak Tmax 400 for black and white work. I later decided that I preferred the tones of HP5 film instead and went over totally to Ilford. An occasional roll of T-Max can be found in my camera bag though. T-Max dev has remained my film developer of choice , a constant in my black and white photography since 1991.

I’ve always loved the framing and the even use of space within the picture. From the handbag placed on the seat on the left, past the couple to the telescope, and even the harbour buoy on the right hand side, everything seems to be in its proper place. The picture is well balanced. The slight mist that day also helped create this dream like shore across from the couple. The picture just came together perfectly. For me, it represents the special moments within a relationship – sharing moments, places and feelings with someone you love.

The couple themselves were lost in the moment and had no idea i was there. I’d seen them as i approached the pier and i sped up slightly to make sure i caught the moment. The body language was just fantastic. They stood like that for some time, just looking out to sea, and i was able to get around five or six frames before i moved on.

From the Archive: Mist, Music and Memories

For this month's From the Archive post, we head back to Norfolk in 2009 where the weather was almost as surprising as the news. Mist, Music and Memories Today marks the tenth anni[...] Read More

Discarded sledge. After the snow has gone and the

Enjoy. The cup was abandoned on a bench. I do wish

Lost glove hanging on a branch next to the path.

Five years since I last saw these guys at the Comm